I let myself read a bit of dungeon design theory (which I should feel like I've got enough to pull from, but couldn't resist), Gus L's recent So You Want to Build a Dungeon, which was great, and among the useful insights that made me glad I read it was this tidbit:

the goal [of establishing faction and other interrelationships] is to create a web of plausible and recognizable connections between the creatures and the space of your dungeon that players can observe, understand and exploit.

This should be especially true for this project, where i want to lean into the social pillar - something I usually de-emphasize.

It took a while to generate ideas for what I felt like would be a healthy number of factions in the megadungeon.  I've now got around 12 major factions and ~18 minor ones. I started laying them out to make a relationship map, but then realized I was actually making a chart that plots their power relative to their ambition or drive, which gave some interesting results: 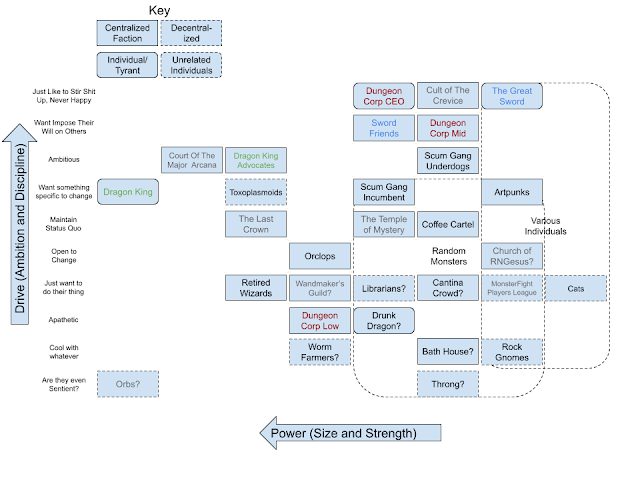 Note the top left section is pretty bare. This seems to be a necessity for interesting faction interrelations. If there is a single high-power high-ambition faction, it will eat up everything. If there are two, then the war between them consumes everything.  And having mroe than that starts to strain plausibility of sustaining them in the limited space of a subterranean complex.

A balance like this should better allow for held tension in the initial situation, politics, dynamism.

Both "Dungeon Corp" (which is super one-note right now, and needs some nuance added) and the Dragon King factions were initially near the top left, but I realized that they are actually composed of multiple sub-factions, which aren't quite aligned on action when push comes to shove.

The bottom right would barely be worth considering as a faction, and the ones close down there are indeed kind of enigmas  that likely won't com into play, but could potentially be changed by the actions of the party.

The top right is the domain of highly motivated, but probably unliked (or just asocial) individuals - or individual leaders of larger factions, if the distinction is desired.

Obviously, nothing would stop multiple factions from sharing the same position on the chart, but I found that finding a specific "slot" for each label gave me seomthing to sort of latch on to and start thinking about why a particular faction might be one notch higher or lower than another.

Here's a more detailed list as it currently stands. 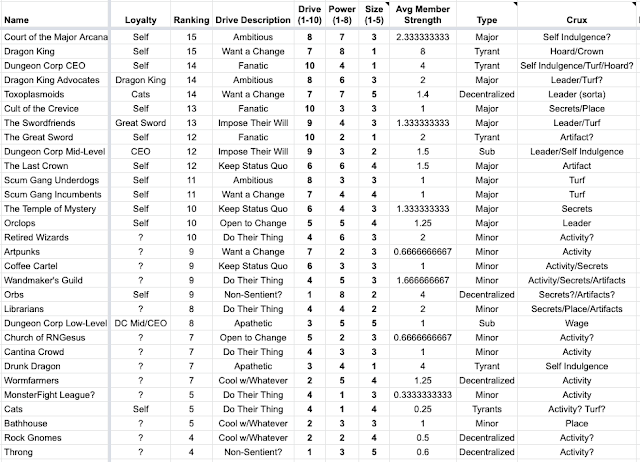 I gave them rough size ratings:

I also took a first pass at categorizing their "crux", which i see as their common interest, Source of Power, Impetus for collective action. The Essence of their Identity. I think I want more diversity here, so will probably mix things up , which may compeltely change some of the factions.

I tend to vacillate between deep interest in Fantasy projects, and SF projects. It's difficult to get into the mindset of one or the oth...